In Japan, there exists a curious thing called a Love Hotel. It’s a place to go and commit adultery. Now, it’s not unheard of for married couples to spend the night, but if you’re going to make love at a love hotel, it’s probably not with your spouse. For this reason, love hotels tend to have certain unique accommodations, like an employee who circles the parking lot and puts covers over customers’ license plates. These hotels are often located in remote areas (you’ll see billboards advertising them a few towns away), and they tend to have high walls and tinted windows. It’s desirable that at a love hotel you will not see another human face during your stay. Even the cashier may be just a pair of hands through a slit in a wall.

In Japan, I think that people want churches to be like love hotels. Not places to have sex, so much, but the total anonymity. At Ayauta Christ Church, most of our contacts come from distant parts of our city or from other cities entirely. Of our congregation of four, none come from the near side of town, much less from our immediate neighborhood. It’s as though someone drew an invisible line, and if you’re too close, the church door is impenetrable. Maybe if we started holding services at three in the morning and putting sheets over the cars of the congregation, we’d boost church attendance. Or if we dug a tunnel from the telephone booth across the street. Didn’t they do that type of thing in Rome? 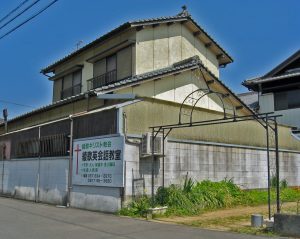 In essence, it’s not socially acceptable to show interest in Christianity. In their hearts, some Japanese have that interest, but they would never come to a church. Sometimes you can get around that by teaching English classes and hosting social events, but many Japanese fear walking into a church building, even for an English class. What will the neighbors think? What if someone found out? In Japan, the social pressure to conform carries an intensity that most Americans cannot imagine. Interestingly, sometimes the neighbors don’t really care. At other times, society accepts adultery better than church attendance.

Unfortunately, Christians contribute to these barriers. Churches in Japan often take on characteristics of closed societies, and the traditions, language, and structure can overwhelm outsiders. Imagine attending a congregation of forty people who haven’t had a new attendee (much less a non-Christian attendee) in years. They have no desire to grow, because they’re comfortable, and for every new member, each person has less time with the pastor. Unbelievers may feel like strangers spending Thanksgiving with someone else’s family.

When a curious seeker enters, they encounter foreign customs, like standing and sitting on cue and reciting the Apostles’ Creed in fairly archaic Japanese. Pontius who? After being expected to find I John 4:1-3 in a Japanese Bible with page numbers that restart at one in the New Testament (nullifying the table of contents), they may never return. 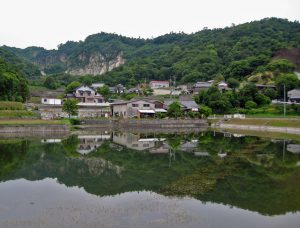 I sense this social tension particularly strongly in Aji. This week, I spent a lot of time in this little town. I’ve found it to be all Sue described: a small fishing/stone-cutting/rice-paddy town of about 8,000. It would be hard to find a place more rural. I spent two nights of the last seven with an old alcoholic man who starts kicking them back at 6 a.m. But he’s very hospitable. When he saw me out on the streets distributing outreach event invitations, he commanded me to come over to his house and stay with him. I’ve never had someone use that grammatical form with me. His name was Sogou-san.

I slept in my own room on the first floor, which I shared with a few cases of Sapporo beer and the family butsudon (a Buddhist ancestor-worship shrine). I felt strange the entire night: there was an open window right next to me, and the neighbors lived about 6 feet away. And because he hadn’t told anyone that I was over (near as I could tell), I felt the entire night like the neighbors would think I was a burglar, or at least that they would try to talk to me in Japanese and I wouldn’t be able to explain myself. Welcome to the goningumi system.

In short, this system was instituted as a form of extreme social control and oppression of Christianity during the Edo era (about 1620 to 1868). The goningumi was the smallest unit of local government, a group of five families, and neighbors were responsible for one another. On the persecution side of things, this meant that if a Christian was discovered in your goningumi and no one had reported him to the government, they’d kill all five families instead of just the Christians (in extreme cases). The government abolished this whole system 150 years ago, but in rural Japan, we see the echoes of it. Many people still feel that same pressure from their immediate neighbors. This is one reason people fear to come to your church: the goningumi will find out. In Aji, aside from bringing the gospel, I feel like we also have to tell people: “Hey! The Tokugawas no longer reign in Edo; it’s not illegal to be a Christian!”

I wonder if Sogou-san is so used to the neighbors knowing every aspect of his life that he no longer cares. Does it give a sense of security to be a part of a goningumi? I don’t know. It wasn’t evil to open the window next to me. There was no reason to keep my visit a secret. One interesting observation is how, in a tiny island nation with 130 million people, people live so close that it facilitates a very intimate knowledge of everyone.

The lack of privacy is an innocent cultural trait that annoys me as a privacy-obsessed American. But most Japanese bear a constant fear of everyone’s thoughts about them, especially when Christianity enters the mix. Though I think my lovable old alcoholic is past the age of caring about things like that. He did, after all, come to our outreach event—albeit drunk.

The next morning, I woke up and went to the monthly guitar sing-along in a local community center. Now, there’s a story behind this class. About the time I came to Kagawa, Sue saw a little flier in the community center advertising this event. This is the second Aji event we’ve found where non-Aji residents can attend. That first month, Kevin and I took a three hour train-train-bus trip from Tadotsu to Aji.

We both felt really nervous with the language barrier, and to top it off we arrived late (due to massive gaps in the train-train-bus schedule). We tried to sneak in the back, but unfortunately, everyone could see us through a window on our way in. When we entered, everyone burst into applause. Now, in that class, they applaud at the end of every song, so it may have been that they had just ended a song, but I believe that it was because they saw two foreign dignitaries walk into the room. And of course, they “encouraged” us to sit front-and-center.

Here’s the class: a guitarist from Takamatsu comes and plays 50- to 150-year-old songs for an hour and a half while a couple dozen ladies in their fifties sing along. There are normally three men in the class: myself, the guitarist, and a man who works for the community center.

That first guitar class will always hold a special place in my heart, not only because of Kevin but also because of the Battle Hymn of the Republic. See, the Battle Hymn‘s tune, somehow, has made it into Japanese culture, with Japanese lyrics about a grandma checking the temperature on her ailing infant (complete with hand motions). After a rousing, dancing rendition of this, I somehow let slip that the song came from America, and before you knew it, the whole class was singing “Glory, glory, hallelujah.” The irony of the moment did not escape me.

This week, I went for my third time, and we play-acted an old Japanese legend (Urashimataro) using puppets with an accompanying song. The guitarist shoved me into the front as the main character, though I had no idea what was going on. This is a rampant condition in Japan which I call “show-off-your-pet-foreigner syndrome.”

Each time, I’ve noticed a sign-in sheet, but I never signed my name because no one ever asked me to. However, this month, I looked at the list, and there it was: “Joey (America).” I can only assume that I’d let slip my name at some point and that the community center employee had been keeping track since.

I was reminded again of just how observant the Japanese are, especially when it comes to foreigners. When I stayed at Sogou-san’s house, it seemed like no one saw me. But I have no doubt that all the neighbors know that a foreigner stayed there (the same one who always drops that weird religious material in their mailboxes). Did they watch from their windows? Did they see my car parked across the street? I don’t know, but I know they know, whether he told them or not.

Japan is a free and democratic society—on the outside. But within, social pressure keeps it a totalitarian regime: not instituted by the shogun or the emperor, but instituted by the neighbors. Or such may be the case. These are the insights of a missionary so green around the ears that the exotic beauty of rice paddies still enthralls him.

To Japan and Back

To Japan and Back