In the meantime, I wanted to share a gem with you. A complete gem. My roommate just got an Amazon Bat Fire Stick, and we plugged it into our TV only to find…

The 1966 Batman movie. It’s even better than I remember. Here’s the best scene:

And yes, the shark does explode at the end. It was stuffed with dynamite by the Joker.

I’ve always loved superhero mythos—they’re just so much fun! At some point, I may end up writing a superhero novel (though The Rift is definitely priority for now). This morning, in a burst of inspiration, I did a little exploratory writing on a story concept. Enjoy.

Two dreams had always consumed Jim Smith: to be a captain of industry and to be a superhero.

The biggest obstacle to the former was that he lived in a dilapidating house with his ailing Grams. Against the latter, his lack of superpowers.

Jim walked home—well skipped home, but he refused to admit he was skipping. The boys at the factory would give him hell if they found out about him skipping. He clutched a paper bag against his chest. The contents were warm.

He frolicked into his room. Grams was hard of hearing, but there was no sense taking chances. He reached into the paper bag, the warmth of the metal gentle, relaxing, almost therapeutic. He put it close to his face and peered at the rough face of the dark, almost blackish metal. It was the stuff of his dreams: U-238.

The Butt Kicker had inspired him, as so many others. Butt Kicker—mightiest of the American supes. Mightiest in the world, because no one beat the good old USA. The BK had been a POW in Nagasaki when the bomb dropped, and the radiation turned that crass Texan into a crass Texan with god-like powers, including a death ray that shot out of his butt. He’d initially called himself the Ass Kicker, but during the Korean War, when his exploits started appearing in headlined across America, a letter from President Truman had gotten him to tone down his language. At least in his supe name.

Jim took the hunk of uranium— a black market purchase from a friend of a friend working on building a nuclear power plant—and rubbed it under his shirt against his skin. He wasn’t really sure how radiation worked, just that it gave you super powers. Or killed you. It was worth the risk. Maybe if he took a bath with it, the warm water would open up his skin pores…

The Butt Kicker’s story had inspired countless copycat attempts: thefts from uranium refineries, missing cesium from college science labs, and attempts to split atoms with a hammer and icepick. The third, of course, was impossible. Jim wasn’t stupid.

He tucked the miracle metal under his mattress. It would leave a nasty lump in the bed, but it would maximize his exposure—eight hours a night. Also, less chance of someone finding it. Intentionally exposing yourself to radiation had been outlawed in the early fifties amid the rising body count of men trying to follow in the footsteps of the BK and the other great American supes.  Not all superpowers came from radiation, but it was the easiest origin to reproduce—at least, if it left you with the ability to reproduce.

His mom had always told him: Follow your dreams. Sometimes, they’re all you have. He carried those words. He’d carry them forever.

We’ve all been there. You read “Well, I’m back,” and you cry that The Lord of the Rings is over. You slog through the Silmarillian, only to discover the same feeling on its last page.

Somewhere around the lost tales and Letters from J.R.R. Tolkien, you realize that you’re just getting desperate. You curse the ineffable philologist of Oxford for not writing more.

After years of psychotherapy, I’ve finally moved beyond my Post Tolkien Stress Disorder. But I’ve always wondered if there were other books written in similar style, something that might be close enough to Tolkien to scratch the same itch. A few months ago, I found such in a surprising place.

In various writing workshops and books and podcasts, I kept hearing about and old series called Dune. I’d heard of it. I knew it had a dessert and giant sandworms. But I didn’t realize until recently that it’s the LoTR of science fiction.

What have Arrakis and Mordor to do with one another? 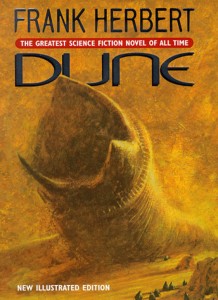 First, if you know nothing about Dune, here’s Wikipedia’s summary of it:

Set in the distant future amidst a feudal interstellar society in which noble houses, in control of individual planets, owe allegiance to the Padishah Emperor, Dune tells the story of young Paul Atreides, whose noble family accepts the stewardship of the desert planet Arrakis. As this planet is the only source of the “spice” melange, the most important and valuable substance in the universe, control of Arrakis is a coveted — and dangerous — undertaking.

Dune was published in 1965 (about 10 years after LoTR). It’s written in that similar old style: lengthy descriptions of scenery, omniscient point of view, and rambling passages of dubious relevancy. Basically, everything that all the writing coaches in the world tell you absolutely not to do in your own stories.

Some characters are a bit cliché—the destined kwisatz haderech (don’t ask me what that means, and I’m on the second book of the series), the purely evil Baron Vladimir Harkonnen, the emotional mother figure. You get the idea.

But there’s good stuff, too!

Those are some of the negative similarities, but I loved Dune because it gave me that same sense of wonder and mystery as LoTR. Not much is clearly explained. The power of the melange spice (the currency the whole world of Dune runs on) is left somewhat a mystery through most of this book. As is the magic system, religious taboos, space travel, and half a dozen other details.

The villain is absolutely evil and purely hateable. I mean, he uses anti-gravity suspenders to hold up his obesity. Seriously, what a touch. And unlike Sauron, we actually get some scenes from his perspective.

The core of the similarity: milieu

Dune is most famous for its brilliant worldbuilding. And that is where it comes closest to satisfying my urge for lost Middle Earth. The world of Arrakis is beautifully built. You get physically thirsty reading this book. It has the same detail yet the same mystery as Middle Earth. And that’s one of the key components of LoTR that you can’t find in modern fiction.

See, modern fiction dives into the perspective of a character and keeps you there through a roller coaster of action and events. Think Hunger Games: we become Katniss and kill a bunch of people. Most modern stories are character-based. No major publisher would pick up something like Dune nowadays. It’s just too painful for the short attention spans of modern readers.

I saw these similarities between the series and questioned whether I was the only person who felt this way. But just recently, I read the book Elements of Fiction Writing – Character and Viewpoint by Orson Scott Card. And low and behold, he agrees! Orson Scott Card, legendary author of Ender’s Game, pointed these exact two stories out as examples of a “milieu story.”

A milieu story is about setting, not characters. LoTR isn’t about the fall of Sauron, it’s about Middle Earth passing from the third to the fourth age. Thus, the book doesn’t end until the elves pass beyond Middle Earth. Dune isn’t about Paul Atreides beating the Harkonnens; it’s about the planet Arrakis and the changes Paul will soon bring to the galactic order.

And that’s why these books are brothers.

Anyways, if you’re looking for a rip-roaring good time surfing through the galaxy, you shouldn’t read Dune.

But if you’re looking for a book filled with mystery, beauty, longing, awesome revenge, and a despicable bad guy—not to mention the most interesting, terrifying world you’ve ever imagined—grab a huge glass of water and read Dune.

The second book of The Rift series is available on Amazon!

Here’s the scoop on the plot:

Pieter has an unwanted magic sword in his life.

He and his friends were given superpower-granting soul armors and charged with defending the world from a pending evil legion invasion. Only the invasion doesn’t seem terribly pending, and the defending seems pretty hopeless. And time consuming. He’s ready to return to his normal life, but his girlfriend’s gung-ho attitude toward the fight is creating unpleasant ripples in their relationship.

Meanwhile, visitors from the other world interrupt Gloria’s life and call into question everything James said about the war and their mission.

Gloria and the others now need to decide which side they want to take and if taking a side is even worth it.

Pieter is our main character for The Prince, but we’ll also dive into Gloria’s life. The team will wrestle with which side they’ll take in the war, we’ll learn more about what makes Gloria tick, and Neil will continue on his quest for a team name. It also turns out that the government may have done some research on the rift in the early 2000s…