Getting close on The Knights

So very close to finishing book #3 (The Knights). Just working on some little phrasing issues. My favorite of at the moment:

“Getting Pieter to realize when something was important was like trying to get a deaf elephant to stop chewing on your flower garden.”

Expected release? Mid-October. Whew, this one has been a beast.

But it’s turned out far better than I anticipated.

I’m really excited to share this one with you.

What’s a fantasy novel without a map, knowwhatimsaying?

Weeeell, recently, I had a map designed of San Luis Obispo. It’ll appear in future editions of the book.

Please share this, especially if you live in the SLO area. I think locals will get a kick out of this. 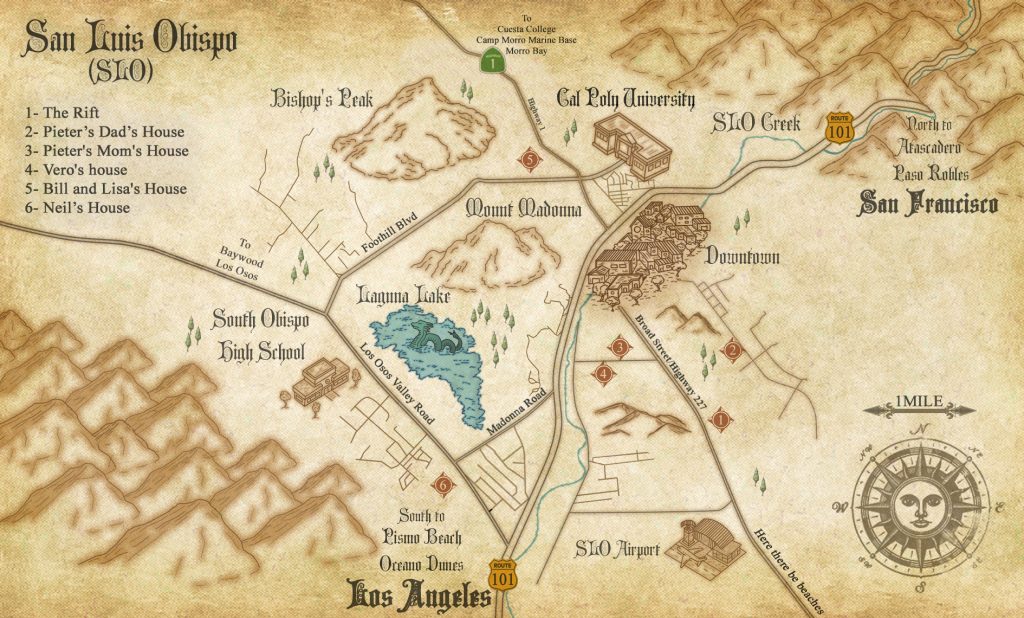 If you haven’t started the series yet, you can download the first one for free right here!

Book 3 has some fun Neil moments. I’m working on the edit process and have come across some colorful ones in the last couple days.

END_OF_DOCUMENT_TOKEN_TO_BE_REPLACED

Of Book 3 of The Rift

It’s odd, but having recently finished The Silmarillion, I seem to recently title everything Of Whatever.

But that is neither here nor there. Book 3 of The Rift series is coming along splendidly. By the by, the title is The Knights. There we go, no more calling it the awkward The Rift Book 3. The Knights. Done.

I will say, progress has been much slower than I intended. In part, this is because I’ve been sick…often…since November. Has anyone else noticed that the cold season this winter has been a tad bit severe? Like, 1353-black-death severe?

Aside from all this plague business, The Knights has also exploded into even more awesomeness than originally intended. It’ll be about 250 pages. Despite my plans to keep it shorter, I just couldn’t fit that many explosions, soul armor fights, and training montages into 150 pages.

Of Other Good Books

In other news, if you’re looking for a really good read, might I suggest The Reckoners series by Brandon Sanderson? The third (and I believe final) book in the series came out a couple months ago, and it took an act of extreme self disciple for me not to devour it in a single day.

It’s like…superheroes. But all the superheroes (called Epics) are evil, so society has collapsed and is fractured into city states ruled by powerful Epics. And people without powers have to find ways to kill Epics and restore the world. And the main character knows the key to killing the strongest Epic in the world, STEELHEART.

I think fans of The Rift will also like it. It’s YA, lots of action, and lots of humorous, witty dialogue. If you enjoy it, post a comment or something and let me know. Do yourself a favor and read book one:

And there we go! I’ll keep you posted at The Knights gets closer to publication.