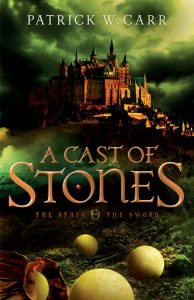 So, recently was sorting through my list of eBooks that I’ve gathered over the years and decided to give A Cast of Stones a try. It’s epic fantasy, so right up my alley. Author: Patrick W. Carr.

For this review, I’m going to call out very minor spoilers.

Patrick Carr is a good writer. His prose was good. His characters make important decisions. They go through transformation. They are unique.

The book progressed leisurely. Actually, it started out painfully slow, sped up a little, then really got going at the halfway point. It wasn’t, like, Fellowship of the Ring slow. It just sort of—unlike my books—wasn’t in a rush to get anywhere. Right, epic fantasy.

Overall, I really, really enjoyed this book. It’s the sort of book that you can enjoy without getting emotional scars (see: Game of Thrones). I read the last 20% or so in a long sitting, not wanting to go to bed until I was done. I don’t usually do that. A book has to be actually good to keep me up like that. Therefore, by logical induction, this book was actually good.

I loved the magic system. There were no fireballs and magic missiles, but there was a truly fascinating system of casting lots whereby gifted individuals could determine the answers to any question they could properly formulate. It’s a well balanced system—powerful, but not overwhelmingly powerful. Makes for very interesting situations.

The driving force of the book was the question: “What’s going on?” If you like the kind of book that drags you along by giving little tidbits of information (but not the whole story), then this is the sort of book for you.

Maybe this bothered me more as an author than it will other readers, but some of the language got on my nerves. For example, the word ale. The word “ale” appears like 86 times on every page.

Now, this is one of the reasons why writing urban fantasy is more fun than writing epic fantasy: you have more words open to you. I can use words like “booze,” “hammered,” “smashed,” “beer,” and “Budweiser.” Epic fantasy authors are stuck with…ale. Occasionally wine.

So, something else that bothered me was that the characters, at times, were stupid. Like, not normal stupid, but stupid like convenient-for-the-author stupid. The main character, after over and over again being told to keep something secret, when he knows that people are trying to kill him, tells his whole life story. Like, more than once.

Overall, though, I liked the characters. Not amazing, but good. The main character is super annoying at the beginning but later awesome. Other characters, though fairly flat, were that sort of…enjoyable flatness. You know, like Gimli.

Without spoiling the ending, I’ll say that I was a little disappointed. A lot was left unresolved, and the book felt a little incomplete. However, it’s part of a series, so I just have to read on. But this one definitely felt like it ended a little early.

So, I’m a Christian. Big fan of C.S. Lewis—even after finding out that **spoiler alert** Aslan is Jesus. But I know that my readers come from a variety of backgrounds, so I’ll mention the Christian undertones in this book.

However, it was done well—a very rare thing and difficult to do. I have no reservations recommending this book to people of a variety of faith backgrounds. Which I don’t do for all Christian books, mind you—some make me weep.

But Carr did it well. Some people in the church are corrupt and evil, others are sincere and loving. Bad things happen to good people, and good things happen to bad people. Kind of like real life. The sort of medieval Catholicism in this book actually added some good flavor.

I give Cast of Stones an 8/10. I legitimately really enjoyed this book. I will probably read the whole series.