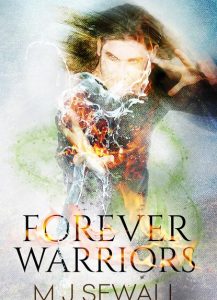 Hey all, just wanted to let you know about a book that I thought you might enjoy. It’s called Forever Warriors. I actually have gotten to know the author and have watched him develop from writing meh, okay books to writing Forever Warriors, has an above-average quota of awesome.

Forever Warriors is urban fantasy, similar to The Rift. It’s set in a small town in California…actually also similar to The Rift. And…wait a second, this book is in a town based on Nipomo, which is just 25 miles from San Luis Obispo. And…is that a female Mexican protagonist?

Wait a minute, it’s like he took my book and…wrote a completely different book. M.J., all joking aside, you totally didn’t copy my series. Though it’s flattering to think that I might have inspired you. Just a little, right? 10% of the royalties? 5%?

So, it’s like these good and evil factions with superpowers that have been fighting through the millenia trying to wipe each other out and gain dominance. In some ways, not entirely different than Night Watch, by Sergei Lukyanenko. Except that it’s not set in Russia. And Forever Warriors is Young Adult.

So, the twist is that the good guys and bad guys get basically reincarnated and fight each other over and over and over. Except in different bodies. This creates some fun scenarios like, “Oh, you’re that guy who killed me in the 60s. You’re a black woman this time. Man, I hate you. Prepare to die.”

Or maybe like, “Hello, my name is Inigo Montoya. You killed me. Prepare to die.”

That premise made the whole book for me.

The system of powers and magic made for some great action/fight scenes, and the fights were spread out enough that they had emotional impact. The final battle at the end of the book was really good and brought everything to a nice close with room for sequels.

Character development: there were characters

Bad guys were a little cartoonish at times, but overall hateable and enjoyable as villains.

That being said, there were a few characters that stood out as awesome: the kinda nerdy bullied kid and the mentor figure (won’t say more for spoilers).

It was written in 3rd person omniscient, which was a little jarring at times, mostly because very few people use it in YA. Overall though, Sewall handled it well.

Check it out for a fun read.

But seriously M.J., if you have a magic fire axe in book two, I might have a few choice words with you. =D