The second book of The Rift series is available on Amazon! 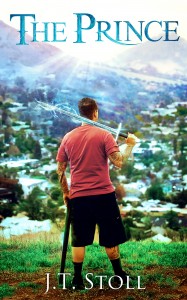 Here’s the scoop on the plot:

Pieter has an unwanted magic sword in his life.

He and his friends were given superpower-granting soul armors and charged with defending the world from a pending evil legion invasion. Only the invasion doesn’t seem terribly pending, and the defending seems pretty hopeless. And time consuming. He’s ready to return to his normal life, but his girlfriend’s gung-ho attitude toward the fight is creating unpleasant ripples in their relationship.

Meanwhile, visitors from the other world interrupt Gloria’s life and call into question everything James said about the war and their mission.

Gloria and the others now need to decide which side they want to take and if taking a side is even worth it.

Pieter is our main character for The Prince, but we’ll also dive into Gloria’s life. The team will wrestle with which side they’ll take in the war, we’ll learn more about what makes Gloria tick, and Neil will continue on his quest for a team name. It also turns out that the government may have done some research on the rift in the early 2000s…