The inside scoop on Amazon’s Write On: Like Wattpad, but better. 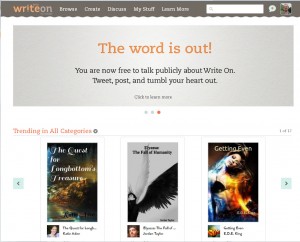 Amazon just released Write On. But what is it, anyways?

Well, I’ve been in the alpha since the beginning. Read on (haha, sorry) for some screen shots, great points, and problems with the platform.

Basically, Write On is an Amazon-branded Wattpad: a social network for writers to post stories and readers to read them, all for free. Even the logos are… suspiciously similar. Though, I suppose that if your company uses the Amazon orange, you may eventually find an Amazon product with your favicon.

So far, the feature set is very simple, but the site is beautiful and easy to navigate. Each genre has a trending list, people looking for feedback, and recently posted stories. Plus, there’s a page that will take you to a random story in the genre of your choice. 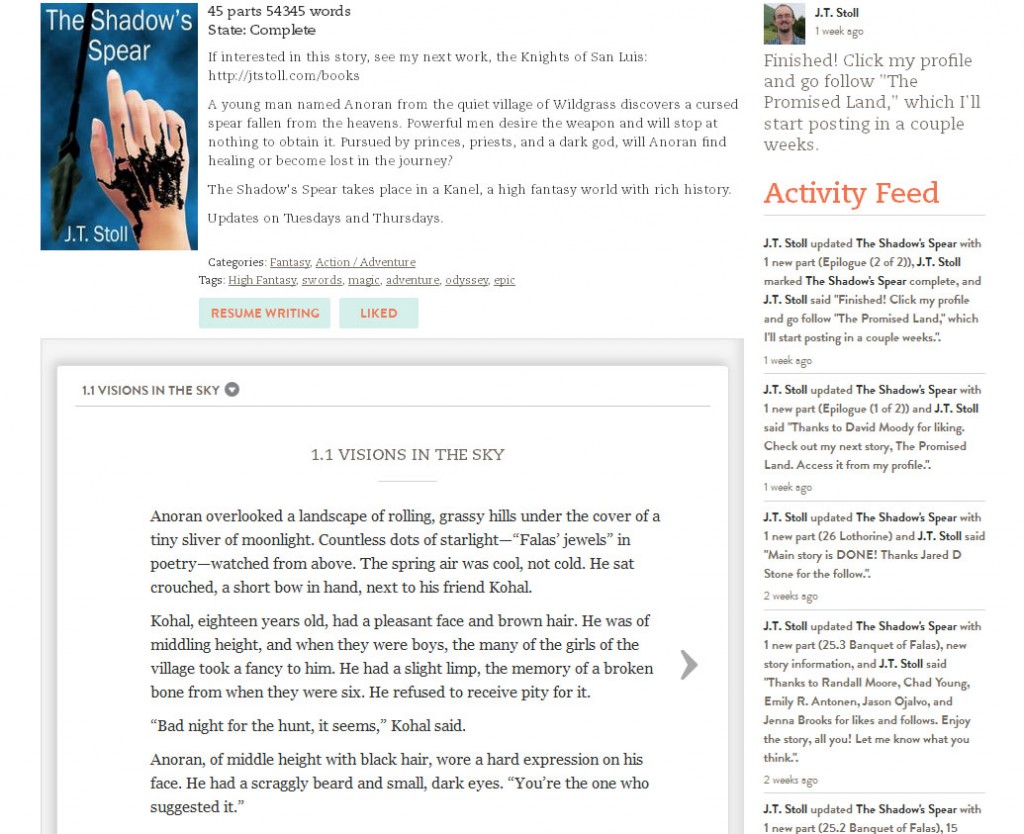 You read stories in a nice, paginated reader. There’s also a button to switch to scrolling, if you prefer.

As of yet, there’s no mobile app, but if you access the website on your phone, the responsive design looks about as nice as most apps. You can like and follow with buttons above the reader. 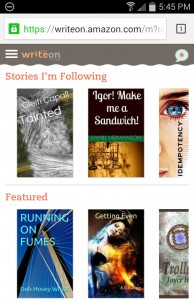 Comments go below the reader, along with the ability to like (or dislike) comments. This is where most of the community happens.

Notifications of new posts in stories you follow, replies to your own stories, and replies to your comments on the stories of others are emailed to you hourly, daily, weekly, or not at all. 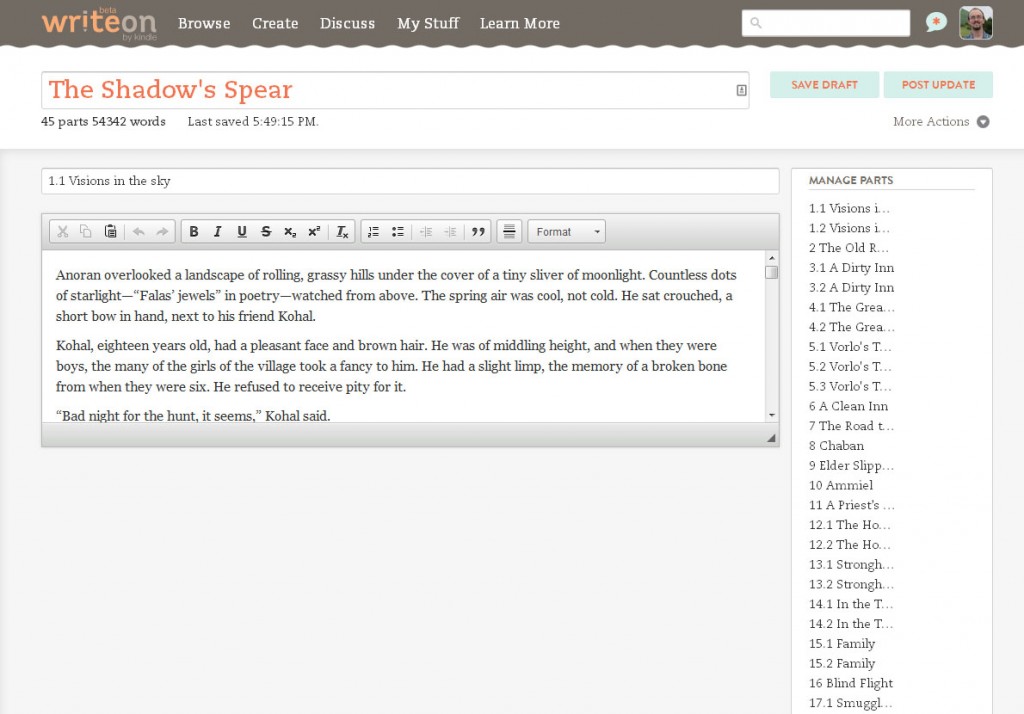 When writing, you can edit chapters separately in a private draft space. This draft ability is the biggest improvement over Wattpad, where you can only have a private draft until you’ve published a chapter: after that, all changes to a chapter are public. On Write On, all changes stay hidden from the world until you publish them. Cuz… you know… the Internet… privacy…

Write On integrates with the KDP cover creator. This is a lovely piece of web programming that enables you to quickly create covers for your work in a browser. You can get lost for hours in the mediocre stock photos. 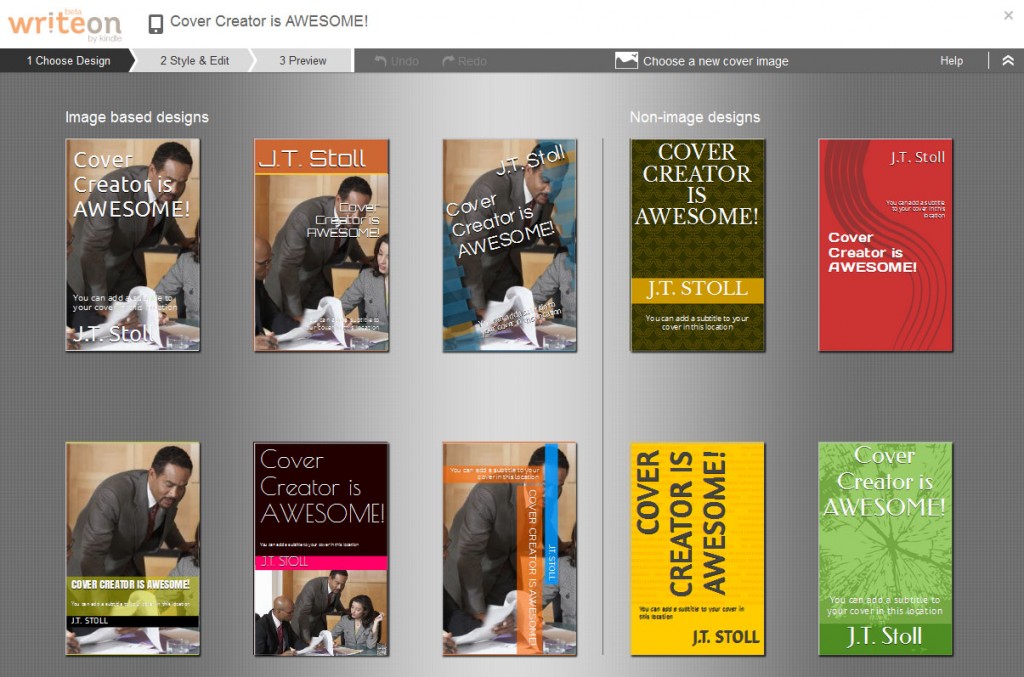 Write On has no way to message other users directly or post on their wall (you don’t even have a wall). The only way to contact other users is to go to one of their stories and post in the comments. It’s like social networking without the social. Or networking.

The forums also leave… uh… much to be desired. Remember the 90s, where you’d lose your posts if you accidentally hit the back button? Yeah, Yeah. There’s also no notification mechanism, so you have to use an RSS feed if you want to follow a thread.

Fortunately, the thing is still in development. And it’s Amazon, so you can be sure they’ve got some pretty skilled code monkeys working on it. Most of us in the Beta pray every night for a way to communicate with each other.

The best part about Write On, so far, is the community. I’m hoping that remains the case once we move out of Beta.

Users give helpful feedback on stories, and if you go around and comment on the stories of other users, you can be sure they’ll return the favor. This doesn’t tend to be the case on larger platforms, like Wattpad.

The Amazon staff is extremely helpful and responsive. The community managers congratulate just about everyone who finishes a story. I was even able to get my story linked to from the Write On home page (I hear that’s something like a 6 month wait for this on Wattpad).

Really Write On is better than Wattpad, at least in these early stages, because it’s a smaller pond. It’s easier to be found by other readers.

I posted a story on both. I have about 3 votes on Wattpad. I have over 70 on Write On. Oh yeah, and that puts me at #1, something I can claim for the rest of my life.

“Really? Where on Amazon?”

“Hey, would you look at the time…” 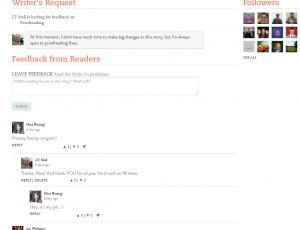 On Write On, I don’t have to compete with stories read by millions. It’s just other writers wanting somebody to read their stuff and willing to do so in return.

Write On: Writers wanting someone to read them and willing to do so for you. Click to Tweet

And you know what? I like that just fine.

Feel free to email me for Beta codes (jt@jtstoll.com). I’ll try to respond, so long as my inbox doesn’t get too flooded. And once you’re on, check out my epic fantasy adventure story, The Shadow’s Spear (haha, fooooled you. That link won’t work without an access code!).