How We All Experience God in Different Ways: A Story of Soaking 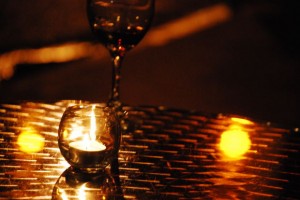 A couple years ago, I began attending Everyday church and transitioned from a quiet, Evangelical background to the Charismatic world. And what an adjustment! Both are expressions of God’s universal church, despite many outward differences. The following is an experience from about eight months after I started attending Everyday. Hopefully it helps to bridge some of the gap between these two church cultures.

A couple weeks ago, a girl from my small group advertised a soaking night. Soaking is one of those new words I’ve learned at Everyday. It means something like, “To bask in the presence of God. Usually listening to music. Sometimes alone. Sometimes with other people. Maybe praying. Usually not sleeping.”

Earlier this week, when talking with a close brother about it, he told me, “You’re going to experience God in a new way this night, and all kinds of religious stuff is going to be broken off you.” I’d been at my new church long enough to know the right lingo: “I receive that.” I left off the optional “Hallelujah.”

After driving for about half an hour, I arrived under the cover of darkness in Cambria, a coastal town of pine-covered hills. In the day, you see rocky cliffs rising over turbulent waves which crash around playful sea otters. I arrived under the cover of darkness and soft rain, and the daughter of the family greeted us at the door. About fifteen of us planned to spend the night in her small, two-room house. Her parents were away for the weekend, so we did what all young people ought: throw a party. Just a different kind of party.

The night began with listening to some recorded worship music. When soaking, the correct protocol is to sit and give an occasional “Thank you, Jesus!” Mature Christians lie down on their faces. I felt completely exhausted from work and had trouble engaging.

A visiting brother named Julian picked up the guitar and began playing. And I mean: playing. We’re lucky the neighbors didn’t complain as the atmosphere filled with his sweet praises. He spun in circles and danced and even knocked his instrument into the wall a couple times. By the end of the night, blood covered his guitar strings.

He sang a lot of “prophetic worship,” that is, making up lyrics spur of the moment. Sometimes, this falls to a flat, uncreative, “Lord you’re love. Love, love, Lord you are. And… uh… some more love in there, somewhere.” However, that night, truths about God came out through his song.

Only, I couldn’t sing along. I really, really wanted to praise God, but with new lyrics every stanza, I couldn’t. So, I wasn’t sure what to do. Most people seemed content to just sit and… well… soak. It’s Biblical to sit before God in silence and just take in: “Be still and know that I am God.” But I found that boring, and I was worn out from work.

Yet all around me, I could not deny the manifest presence of God touching people. And it went deeper than just an emotional experience. It was God’s hand.

For instance, we had another visiting brother. At one point, a few people prayed for Him, and God touched him. He felt such energy that he went and ran around outside in the drizzling rain. Later, he kept talking about how he’d never experienced God like that. How could he go back to life as normal? The truths of who we are in Christ became so real that he could never be the same. And this was not a brother who came in preconditioned to have an emotional experience; he came from a fairly conservative background.

However, after so many repetitions of “It’s so heavy in here,” and “God’s presence is so strong,” I felt discouraged. When everyone around you feels the joy and peace you desire, it gets old. You start asking questions. “What’s wrong with me?” “Am I demonically oppressed?”

I found it prudent to step away and lay down in the men’s bedroom (despite that Julian’s voice penetrated the entire house). Sometimes, it’s impossible to sort these things out in the moment, and wisdom dictates stepping away for a breather. Especially when the party lasts all night.

I turned to God’s Word and spoke truths like, “The God of Peace will soon crush Satan under your feet.” I read a Psalm and took comfort there there is indeed “A river whose streams make glad the city of God.” But, tired as I was, I didn’t experience much victory.

Julian came in and spoke with me. I told him a little of what I felt, and He grabbed my hand and said, “Ask, God what’s up.”

And I came to this conclusion. I don’t naturally experience God in that environment. Other people do. But I need specific substance, an element deliberately lacking in a soaking time. Manifest presence or none, it goes against my natural bent to experience God in that atmosphere. And that’s OK. The people face-down on the floor, they’re fish. The water is their home. I’m a dude. I have to train to function in water. As time goes on, I plan to, but it takes grace to become an amphibian.

Many people hit this kind of a barrier entering a Charismatic fellowship. We in the “Spirit-filled” world would love to ignore this unpleasant fact or brush it away, but honest inquiry would serve us better.

Some people are quick to judge: “You’re just religious.” That is, you like form without relationship. When you encounter the real presence of God, you find it repulsive. You have a religious spirit pulling you away from God. Quick, break out the anointing oil!

However, I shrink from using this explanation. For people who don’t know God, the fragrance of Christ can be the stench of death (II Cor. 2:16), and men run from the light because their deeds are evil (John 3:19). But for the children of God, the Spirit testifies, and anyone who believes in the Son of God has this testimony in his heart (I John 5:6,10).

Yes, sometimes we have oppression. But before judging, why not give the benefit of the doubt?

Part of the reason people want to throw out the “you’re just religious” argument is because of an over-focus on the presence of God as occupying a space (i.e. the cloud descending on the tabernacle). This view leads us to think that everyone in a room filled with the presence should automatically emotionally experience (or you’re demonized).

However, our emotions can be affected by tons of different factors, even in a glory-filled space. If you naturally enjoy sitting in a dimly lit room listening to music, then you’ll love a soaking night. If that’s not your thing, then even if God’s occupying the room, you may not feel Him very much. Or maybe you just had a long day at work.

So, the real question is this: dimly-lit-room people, do you have grace for not-dimly-lit-room people? Does it threaten your walk with God to admit that a healthy person may not experience Him in your soaking session? Do you throw around “religious spirit” because you’re unwilling to give people grace to be touched by God in different ways? And when there really is spiritual oppression, can you minister non-judgmentally? If a new person or nonbeliever comes, do you show them attention and care, or do you focus on your own experience and let the drowning fend for themselves?

Julian let go of my hand, and I told him what God showed me. He said, “Yeah, that sounds good.” That’s what the body of Christ looks like.

Julian played for another hour and a half, and we didn’t get to bed till 2:30. Ah, to be in college, again. I wish I could say that I “got rocked” by the Spirit, but I didn’t, so much. However, I became unthreatened by the experiences of others. And when I woke up to a beautiful morning, I felt peace. The presence of God does that, even if you don’t feel it at the time. Love does that, too.

The following night, alone, I spent a few hours in prayer alone with God, and He spoke powerfully and deeply into my heart. I lay on my bed clutching my Bible and trembling for an hour. Through a night of anguish, God plowed the soil of my heart. And I experienced Him and heard Him in solitude and silence.