Something else I wrote while in Japan. Just got around to editing it and posting it.

Television in Japan is all about food. Sorry, all you anime fanboys, but that’s just how it is. And even beyond shows specifically about food (i.e. they go to different parts of Japan and eat the regional specialty), they have shows involving food in a significant manner (i.e. they go to different parts of Japan, do other stuff, then eat the regional specialty). According to my extensive, broad, and unbiased research (which has consisted of watching TV once and a while with people I’ve stayed with), I’ve put together the following pie chart of the contents of TV in Japan: 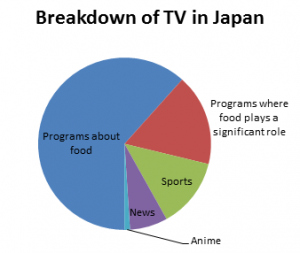 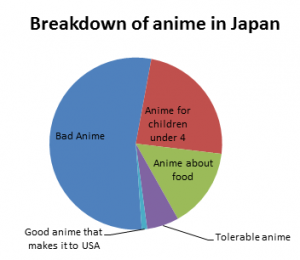 Anyways, TV in Japan mostly looks like this. In a studio somewhere, a number of Japanese celebrities are about to watch a show along with you. While the show plays, the entire time, their faces are in little circles in the upper right hand corner of the screen, so you can observe their reactions to the program. Why do they do this? Well, how else is the audience supposed to know the correct way to react to what they’re watching?

Anyways, more Japanese celebrities are trekking around backwater of Japan, looking for good soba noodles in a prefecture known for good soba noodles. They come upon a famous local shop. The owner (a Japanese man in his fifties) steps out the front door. We flash to a history of the restaurant with a gentle musical interlude.

Back in the present, we see how this person makes his famous soba noodles. He and his wife get the celebrities (the ones at his shop, not the ones making faces in the upper-right hand corner of your screen) to make the noodles and assorted fixings with him. Eventually, they get ready to eat. EXTREME
CLOSEUP of the food, blurry but slowly coming into focus. The camera pans across this sexy plate of soba noodles which glistens seducingly.

First celebrity takes a bite. Camera closes in on his face as we await the verdict. Pause for dramatic effect: “Oishii” (delicious). Sometimes, they say “umai,” which is a different word meaning “delicious.” At least 20% of their lines in any given show are one of those two words. I’ve never heard them say the food was bad.

I wonder what it would be like to be on one of these shows: touring Japan, meeting middle-aged shop owners, eating good food, saying “umai.” Seems like a good life.

Other questions that haunt my mind:

Do you have to have professional training to say “oishii” and “umai” correctly?

What’s it like being a cameraman and doing all these extreme close-ups of food? Do the cameramen get to eat any?

Other than the Iron Chef, could any of these programs make it in America?